A small cadre of former Obama administration officials have been counseling Iranian Government officials since 2016 on how to deal with the Trump administration, according to the Daily Beast, which notes that Foreign Minister Mohammad Javad Zerif has been involved in the ongoing discussions.

Conversations between former Obama officials and Iranian government officials have been ongoing since November 2016. Zarif, who visits the U.S. every year for the U.N. General Assembly in New York, usually meets with lawmakers, think tanks, journalists, and former officials when he is in town.

But the recent round of conversations, which took place over the phone and in person over the last two months, came as lines of communication between the U.S. and Iran, through intermediaries in Europe and elsewhere, deteriorated. –Daily Beast

“It’s not just about what they were saying to the Iranians,” an aide told the Beast. “It’s about what they were saying to their political allies back here in the U.S. Their strategy was to divide and isolate the Trump administration just as the Trump administration was trying to re-establish deterrence with Iran. In the current highly partisan political environment, the only safe course is to signal national unity—and they contributed to eroding that at home and abroad.”

In September, former Secretary of State John Kerry admitted to meeting with Zarif “three or four times” since Donald Trump took office, a move which drew condemnation from conservatives who said Kerry was “coaching” the Iranian FM on how to deal with the White House.

John Kerry had illegal meetings with the very hostile Iranian Regime, which can only serve to undercut our great work to the detriment of the American people. He told them to wait out the Trump Administration! Was he registered under the Foreign Agents Registration Act? BAD!

In response, some Republican lawmakers levied charges that Kerry is engaged in rogue diplomacy and is undermining the active, elected administration. 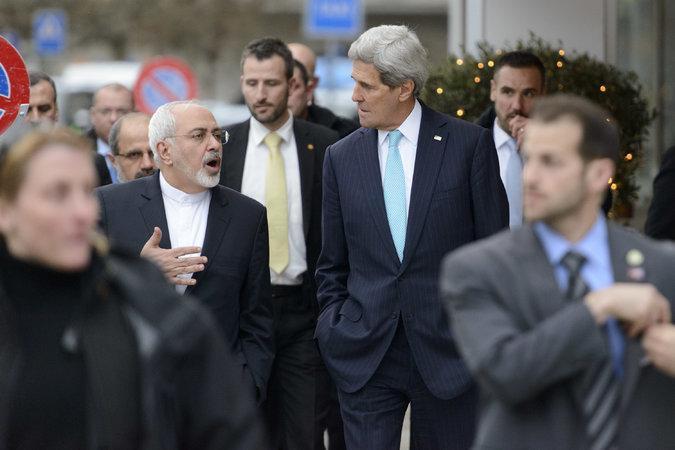 Kerry defended the meetings, saying: “What I have done is tried to elicit from him what Iran might be willing to do in order to change the dynamic in the Middle East for the better.”

Tensions between the US and Iran have increased recently, after Iran warned that it would increase its stockpile of nuclear-related materials – though the International Atomic Energy Agency said in a quarterly report seen on Friday by the Wall Street Journal that Tehran remains in compliance with its main commitments under the 2015 nuclear agreement. On May 8, the one-year anniversary of President Trump pulling out of the nuclear deal, Iran said that it would begin to scale up its nuclear program, and would disregard limits on its stockpiles of enriched uranium and heavy water.

Iran has rebuffed Trump’s calls to come back to the negotiating table for a new, stricter nuclear accord – and has slammed US sanctions which have sent the Iranian economy into a deep recession.

And now we learn that former Obama administration officials have been advising Iran this whole time.

Three Obama officials who worked closely on the Iran nuclear deal, one of whom is still in touch with Iranian government officials, traveled to Capitol Hill to brief congressional Democrats about the situation. Those former officials said would not say if they passed information from Iranian government officials to members of Congress. Rather, they said they focused on educating members about their experience working with Iranian leaders and how Tehran reacts to economic pressure.

Several former officials who spoke to The Daily Beast stressed that their discussions with their Iranian contacts were “normal.” But in other corners, these kind of talks cause alarm. A Republican congressional aide who works on Iran policy told The Daily Beast the conversations may run counter to the Trump administration’s messaging to the Iranian government. –Daily Beast

“Former Obama administration officials gave wrong-headed advice to the regime in Iran that U.S. sanctions couldn’t work without European support and that the regime should just wait out the Trump administration,” according to Mark Dubowitz, CEO of the DC-based think tank Foundation for Defense of Democracies, which has advised the Trump administration on Iran policy. “Now with U.S. sanctions biting and the Islamic Republic facing an economic crisis, they’d be wise to tell their Iranian counterparts to return to negotiations. Bipartisan support for efforts to block the Islamic Republic’s malign activities strengthens American security.”

Others have defended, or at least downplayed the discussions.

“The communications are not surprising because of the lack of direct contact between the U.S. and Iran. The urgency is greater now. There is a sense of, let’s make sure that there is some channel open,” said Dalia Dassa Kaye, director of the Center for Middle East Public Policy at the Rand Corporation. “But it’s not clear that they are talking to Iranians that are making the ultimate decisions in the country. It’s not clear that those talking to each other, those in the room, are representing the realities on the ground in their respective countries.”

One former official who worked on the Obama administration’s Iran policy told The Daily Beast he spoke with Iranian government officials as recently as a few weeks ago, as tensions were cresting. His message, he said, was simple: The Trump administration can escalate things plenty all by itself; the Iranians shouldn’t take the bait, fuel the fire, and move things from bad to worse by, for example, pulling completely out of the nuclear deal.

Another former senior Obama administration official, who said he was not himself aware of the conversations, called the talks “neither unusual nor particularly consequential.”

“Exaggerating their significance lends undue credence to those cynically blaming others for their own failing approach,” the ex-official said.

Separately, some former Obama officials are trying to keep the roots of the Iran nuclear deal alive by taking the pulse of lawmakers on Capitol Hill to gauge whether they are in favor of restarting talks in the future. They are also speaking to officials in Europe who are concerned about their long-term ability to trade with Iran and stick to the terms of the Iran nuclear deal, all while attempting to avoid U.S. sanctions. Meanwhile, Sen. Dianne Feinstein (D-CA)—formerly the chair of the Senate Intelligence Committee—had dinner with Zarif “a few weeks ago,” according to a Politico report published May 23. –Daily Beast

Will the 1799 Logan Act be invoked, which made unauthorized diplomacy with foreign powers by a private citizen illegal?

Get your Real American news: